by admin
in Management

(Bloomberg) — Multiple stress points are emerging in credit markets after years of excess, from banks stuck with piles of buyout debt, a pension blow-up in the UK and real-estate troubles in China and South Korea.

With cheap money becoming a thing of the past, those may just be the start. Distressed debt in the US alone jumped more than 300% in 12 months, high-yield issuance is much more challenging in Europe and leverage ratios have reached a record by some measures.

The strains are largely linked to aggressive rate increases by the Federal Reserve and central banks around the world, which have dramatically changed the landscape for lending, upended credit markets and pushed economies toward recessions, a scenario that markets have yet to price in.

Globally, almost $650 billion of bonds and loans are in distressed territory, according to data compiled by Bloomberg. It’s all adding up to the biggest test of the robustness of corporate credit since the financial crisis and may be the spark for a wave of defaults.

“Many are likely to be slightly more complacent than they should be,” said Will Nicoll, chief investment officer of Private & Alternative Assets at M&G. “It is very difficult to see how the default cycle will not run its course, given the level of interest rates.”

Loan-loss provisions at systematically important banks surged 75% in the third quarter compared with a year earlier, a clear indication that they are bracing for payment issues and defaults.

Most economists forecast a moderate slump over the next year. A deep recession, however, could cause significant credit issues because the global financial system is “vastly over-leveraged,” according to Paul Singer’s Elliott Management Corp. 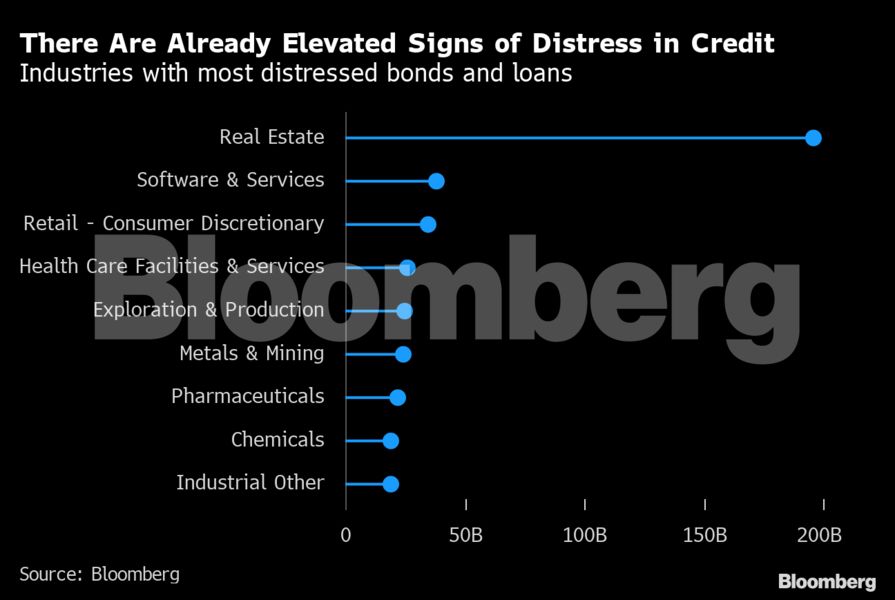 Right now, the outlook for economic growth is a concern. Rolling recessions are likely across the globe next year, with the US likely to slip into one in the middle of next year, Citigroup Inc. economists wrote in a note.

The first half of 2023 will be “bumpy” and “characterized by higher for longer volatility” Sue Trinh, co-head of global macro strategy at Manulife Investment, said on Bloomberg Television. “There is a little ways to go in terms of fully pricing in the global recession risk,” she said, adding that financial conditions are likely to improve in the second half of the year.

Mike Scott, a portfolio manager at Man GLG, said that “markets seem to be expecting a soft landing in the U.S. that may not happen. The leveraged loan market is something that we’re monitoring as well.”

That market has ballooned in recent years. There was $834 million of leveraged loan issuance in the US last year, more than double the rate in 2007 before the financial crisis hit.

As demand grew, so did the risk. In new US loan deals this year, total leverage levels are at a record versus earnings, data compiled by Pitchbook LCD show. There’s also a looming earnings recession there, Morgan Stanley strategist  Michael Wilson has warned.

Leveraged loans have seen the “greatest buildup of excesses or lower-quality credit,” according to UBS strategist Matt Mish, Default rates could rise to 9% next year if the Fed stays on its aggressive monetary-policy path, he said. It hasn’t been that high since the financial crisis.

Many investors may have been caught out by the Fed this year. They’ve consistently bet that the threat of recession would force the central bank to ease off, only to have been repeatedly burned by tough talk, and tough action.

While the pace of hikes has slowed, Chair Jerome Powell has also been clear that rates still have to go higher, and will stay elevated for some time.

The Secured Overnight Financing Rate, a dollar benchmark for pricing, is about 430 basis points, an 8,500% increase since the start of the year.

And in this new world of higher interest rates and a greater risk aversion, there’s already a squeeze on global banks, which have been left saddled with about $40 billion of buyout debt ranging from Twitter Inc. to auto-parts maker Tenneco Inc. Lenders had expected to quickly offload bonds and loans linked to the acquisitions but were unable to do so when the appetite for risky assets plunged as borrowing costs rose.

There’s another reason for concern. The search for yield during quantitative easing was so desperate that borrowers were able to soften investor protections, known as covenants, meaning investors are far more exposed to the risks.

For example, more than 90% of the leveraged loans issued in 2020 and early 2021 have limited restrictions on what borrowers can do with the money, according to Armen Panossian and Danielle Poli at Oaktree Capital Management LP.

With markets awash with cash, more firms opted for cheap loans that had few covenants, something that’s altered balance sheets.

Historically, corporates typically used a combination of senior loans, bonds that ranked lower in the payment scale and equities to fund themselves. Over the last decade, however, demand has allowed firms to cut out the subordinated debt, meaning investors are likely to get less money back if borrowers default.

Almost 75% of issuers in the US have only loans in their debt capital structure, according to JPMorgan Chase & Co., compared with 50% in 2013. 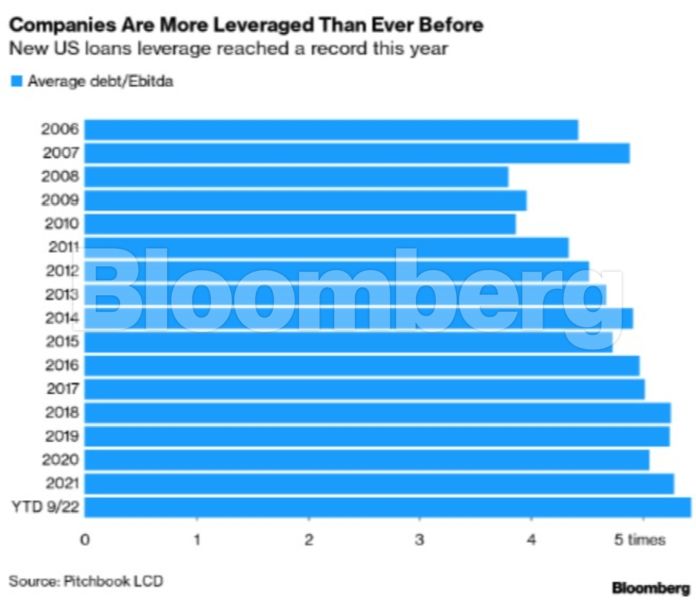 Oaktree Capital Management LP has warned that some companies are even more vulnerable than thought because they made adjustments for everything from synergies to cost cuts when calculating their leverage ratio. The economic slowdown means many of those assumptions have probably not been borne out.

Higher borrowing costs could also have an impact on the collateralized loan obligation market, which pool the leveraged loans and then securitize them with tranches of varying risk.

The underlying loans have higher leverage ratios and weaker covenants than in the high-yield market, he said. “We have less concern that these defaults” hit the safest tranches because they have “over-collateralization levels that are generally acceptable.”

The erosion of covenant protections also means the CLO holders and other investors in leveraged loans, such as mutual funds, are more vulnerable to losses than in the past. Recovery values as a result could be lower than average when defaults do occur, Oaktree said.

Daniel Miller, Chief Credit Officer at Capra Ibex Advisors, is also worried about covenants, particularly those that circumvent the priority of creditors.

“They are potential ticking time bombs sitting in the documentation,” he said.

Pockets of volatility are already surfacing. In South Korea, credit markets were thrown into turmoil when the developer of Legoland Korea, whose biggest shareholder is the local province, missed a payment on a loan. The fallout sent shorter duration won corporate spreads to a 12-year high. 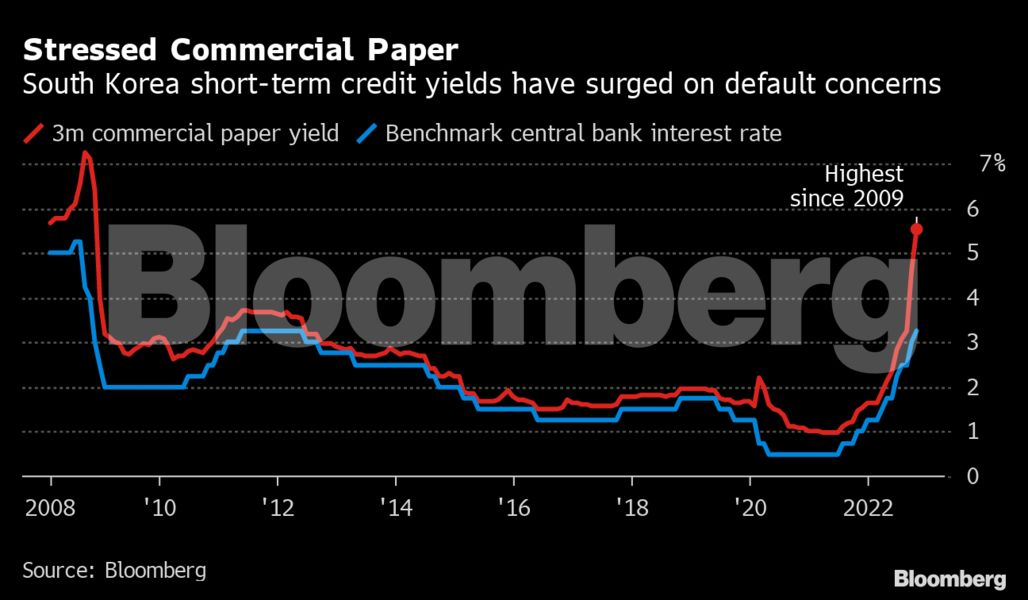 Asia was already dealing with the fallout from record defaults on dollar-denominated Chinese property bonds, which caused junk notes from the nation to lose almost half their value.

Despite government efforts to support the market, the contagion risks spreading further as rising debt payments cause increased stress on borrowers in Southeast Asia and India. A Vietnamese parliamentary committee recently warned of repayment difficulties at some developers.

The meltdown is a signal that governments and central banks will have to tread carefully on fiscal issues, with market sentiment so fragile. The UK provides another example of how quickly things can go wrong.

Variations on these issues are likely to be repeated as tighter lending conditions and increased caution take hold.

LDI is the first “of many market hiccups,” Apollo Global Management Inc. Chief Executive Officer Marc Rowan said last month. “For the first time in a decade investors are asking not just about the reward, but about the risk associated with investments.”

No Result
View All Result