Today’s results are focused on a number of new discoveries of gold and copper as well as follow-up drilling on the previously announced 210 (February 17, 2021) and Alizee (January 25, 2021) Gold Zones. These results represent regional exploration drilling as well as mineralization identified up-hole during definition and expansion drilling of known gold zones on the Perron Project. A complete list of results is available in Tables 1 through 7 and presented in Figures 1 through 4. All drilling data for the Perron project, including collar, survey, and individual assays, is available in the Amex data room at https://amexexploration.com/properties/quebec-exploration-perron-property/drill-data-room. In addition to the results presented below, Amex also announces that drilling has resumed on January 3rd with 8 drills currently operating across the Project with plans to expand to up to 11 drills during the winter months.

Jacques Trottier, PhD, Executive Chairman of Amex Exploration, commented, “The Perron project has historically shown a strong gold signature within the Beaupre Rhyolite Block. The results presented today further validate the gold potential of the entire Beaupre area and we are seeing gold mineralization occurring in a variety of orientation and mineralization styles. This further confirms our expectations that as we continue to advance our exploration of this strongly endowed gold system, we will continue to make additional gold discoveries and expand upon the known mineralized horizons.”

Trottier continued, “The E2 Gold zone is of great significance for Amex as it has the potential to add ounces per vertical metre in close proximity to the High Grade Zone. As we have seen at the High Grade Zone we are hopeful that the strike and grade will increase at E2 as we get deeper into the system. Our regional exploration program has been a complete success by any measure and the areas highlighted in this release all warrant follow-up work.” 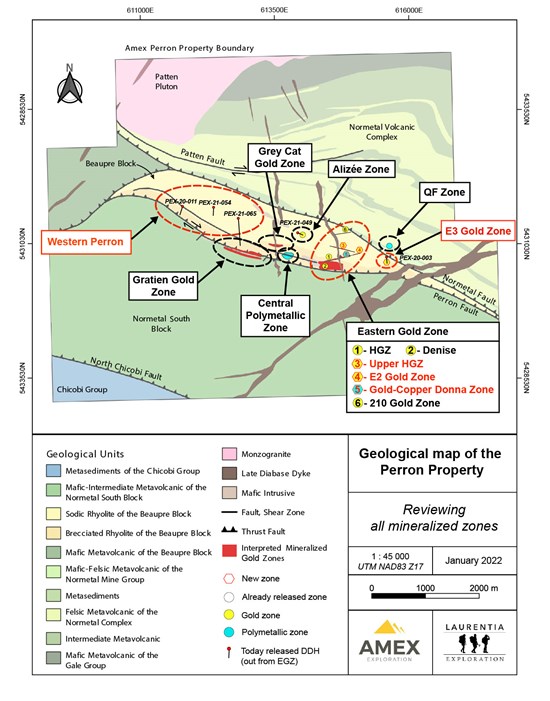 Figure 1: Plan view of the geology of the Perron Project and all known mineralized zones, including the new zones announced today in red text.

The E2 Gold zone (“E2”) represents one of the most significant new discoveries on the Perron Project since the discovery of the High Grade Zone (“HGZ”) in 2018 (Figure 2). The E2 zone was discovered by stepping out to the East along the same structure that hosts the bonanza mineralization of the HGZ. Mineralization identified to date is very similar to the HGZ, with a repetition of a mineralized hanging wall vein, a largely unmineralized narrow mafic sill, and a mineralized footwall vein. Sulfide minerals are also very similar, with sphalerite being the most common sulfide associated with gold mineralization, along with lesser pyrite. Visible gold has been identified in several drillholes. Of particular importance is the projected plunge of the mineralization. The E2 zone is situated approximately 500 metres to the East of the HGZ, and the projected plunge of mineralization (based on drillholes to date) appears to be similar to that of the HGZ, plunging to the East-Northeast at approximately ~70 degrees (Figure 3). This is important as it represents a possible repeating ore shoot along the same structure as the HGZ. Expanding upon the E2 zone and testing its down-plunge grade and continuity is one of Amex’s top priorities for the ongoing winter drilling program. 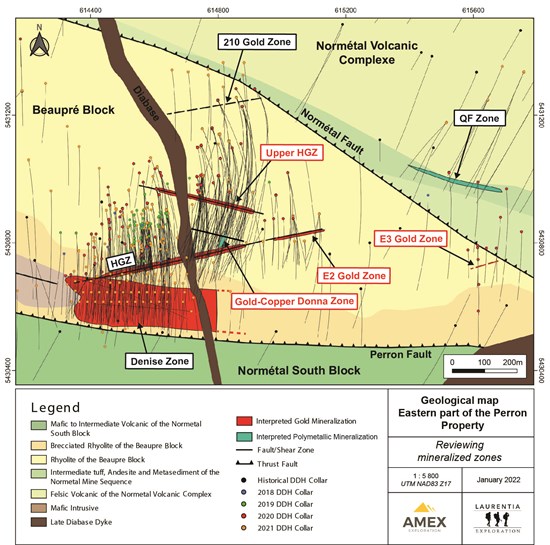 Figure 2: Plan view of the geology of the Eastern Gold Zone to E3 Gold Zone and all known mineralized zones, including the new zones announced today. 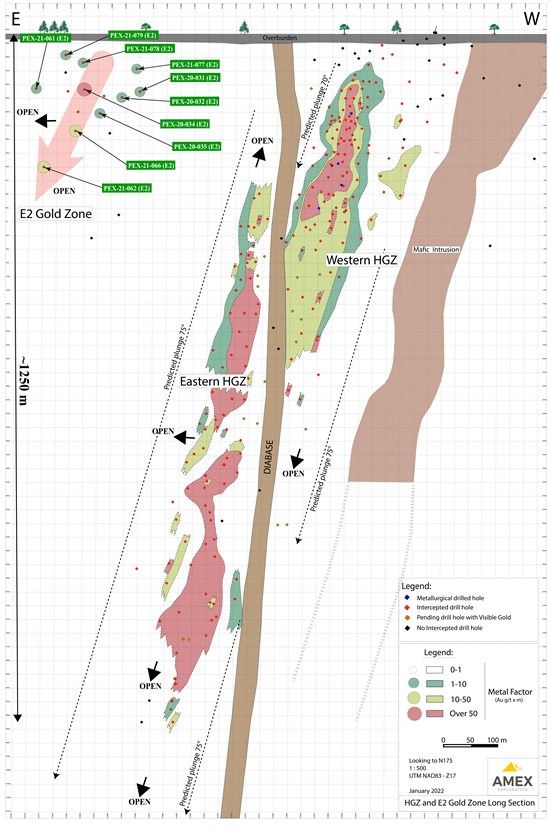 The Gold-Copper Donna Zone (“Donna”) discovery occurs immediately north of the HGZ at depth (Figure 2). It was discovered during deep expansion drilling of the HGZ. The mineralization identified, which is similar in each of the three holes reported, consists of highly chlorite-garnet-amphibole altered rhyolite which hosts centimetre-scale stringers of chalcopyrite-pyrrhotite. The correlation between gold and copper is quite strong. Amex has completed a borehole electromagnetic survey on this new discovery and is planning follow-up drilling to be completed in the coming months.

The Alizee Gold Zone (“Alizee”) was previously announced as a discovery by Amex on January 25, 2021 with hole PEX-21-041 returning 22.44 g/t Au over 7.30 m. The results below are from follow-up drilling on the discovery hole (Figure 1). Gold mineralization at Alizee is associated with quartz veining, quartz-carbonate breccias, silica flooding and strong chlorite-carbonates-biotite alterations, along with sphalerite, pyrite, trace chalcopyrite, and occasionally visible gold. Amex is reviewing the data and planning follow-up drilling to be completed in the coming months.

Table 3: Assay results from follow-up drilling of the Alizee Zone at Perron

The E3 Gold Zone (“E3”) was discovered during regional drilling to the East of the HGZ, similar to the E2 zone (Figure 1). Amex completed systematic step out drilling along the structural corridor that hosts the Eastern Gold Zone which resulted in the discovery of the E3 zone, which is approximately 800 metres east of the HGZ (Figure 2). Gold mineralization is typical to that of Perron. Gold is hosted within quartz veins and veinlets in the altered Beaupre rhyolite, and associated with red sphalerite and pyrite mineralization.