After the central bank cut both the short-term and the
medium-term loan prime rates in recent weeks, IHS Markit experts
judge it likely that considering the reserve requirement ratio
(RRR) is still at around 8.4% after it was reduced in December
2021, there is room for a further cut in the first quarter.
Overall, we expect credit growth in mainland China to be around
11.6% in 2022. 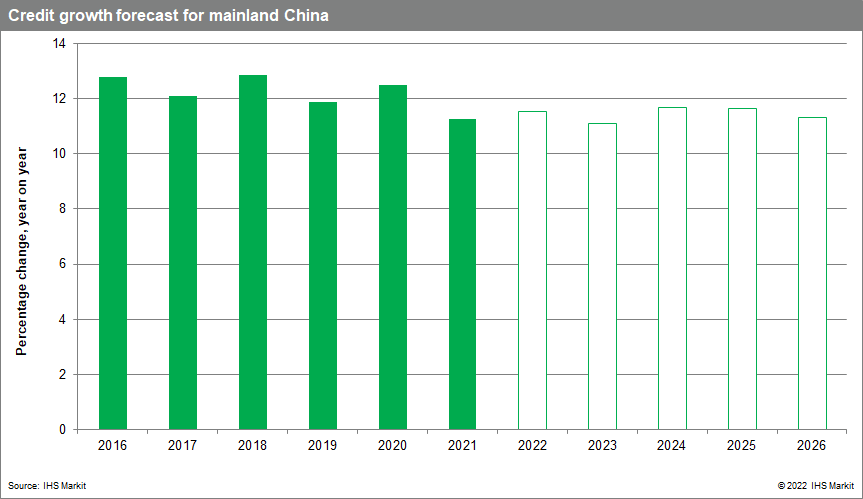 The impact from the extension of Bangladesh’s
loan-classification relaxation on asset-quality
reporting.

At the end of 2021, Bangladesh authorities had shown willingness
to relax the minimum loan-repayment requirement for a loan to be
classified as normal; this policy will likely continue into 2022.
Although the regulators may show resilience and a strong stance
towards better loan classification, in the beginning, IHS Markit
experts expect these will once again relax. We expect the
non-performing loan (NPL) ratio to remain around 8.3% for 2022. 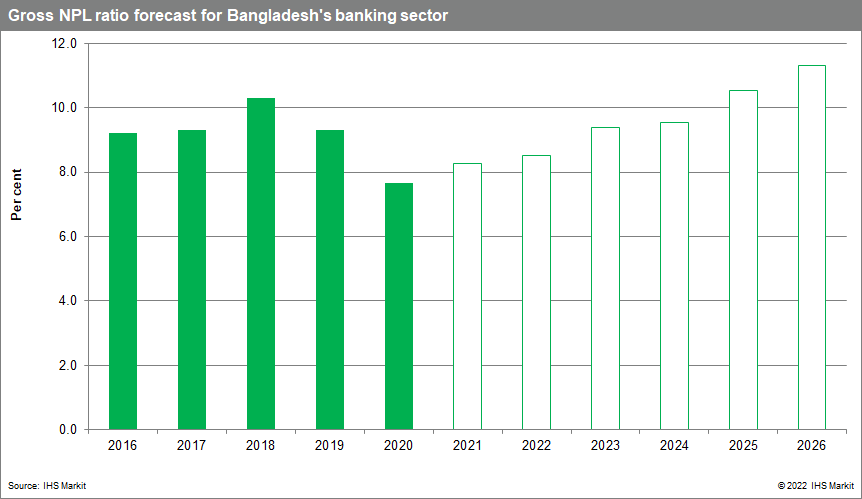 Capital injections for Turkey’s state-owned banks
likely on the horizon.

Turkey’s sovereign wealth fund (Türkiye Varlık Fonu Yönetimi:
Turkey Wealth Fund, or TWF) is likely to inject capital into the
country’s three state-owned banks in the first quarter to maintain
expansion capital and boost capital buffers that have been eroded
by rapid lending and higher risk-weighted assets. Not yet announced
officially, the TWF is rumored to be considering a TRY51.5-billion
(USD3.8-billion) capital infusion into state-owned banks including
Ziraat Bank (TRY22.5 billion), Halkbank (TRY13.5 billion), and
Vakifbank (TRY13.5 billion), which we expect to occur before the
end of the first quarter. Although still above local requirements
(Tier 1 minimum of 8.5% including capital conservation buffer),
state-owned banks have the lowest cushion when compared with
private and foreign-owned banks. In light of low profitability, we
expect credit growth to be curtailed if state-owned banks do not
receive capital injections soon. 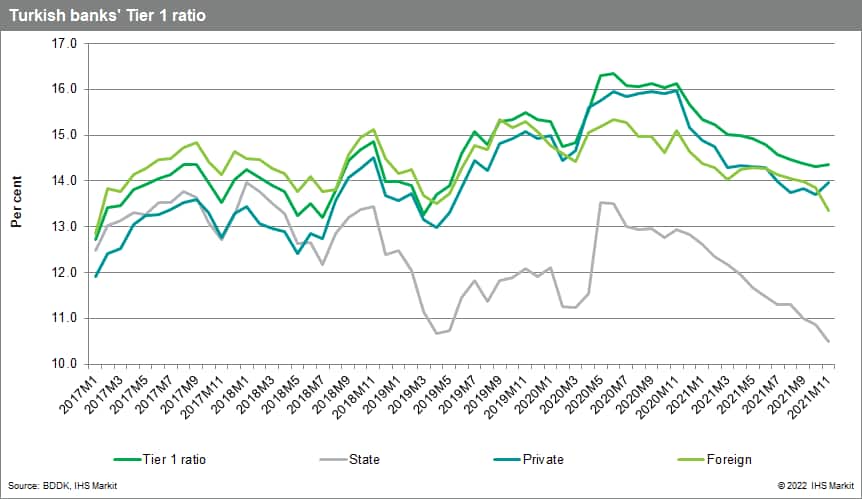 Developments relating to the sale of Citibanamex in
Mexico.

Citigroup announced on 12 January that it will be selling most
of the portfolio and assets of its branch in Mexico, remaining as a
small-sized corporate banking institution. The decision follows
four complicated years at the branch, with relatively low
profitability and significantly low credit growth. Over the course
of February – and then later through the year – we expect that
further details will be provided about the sale process and some of
the potential buyers, which could shape the banking sector going
forward. 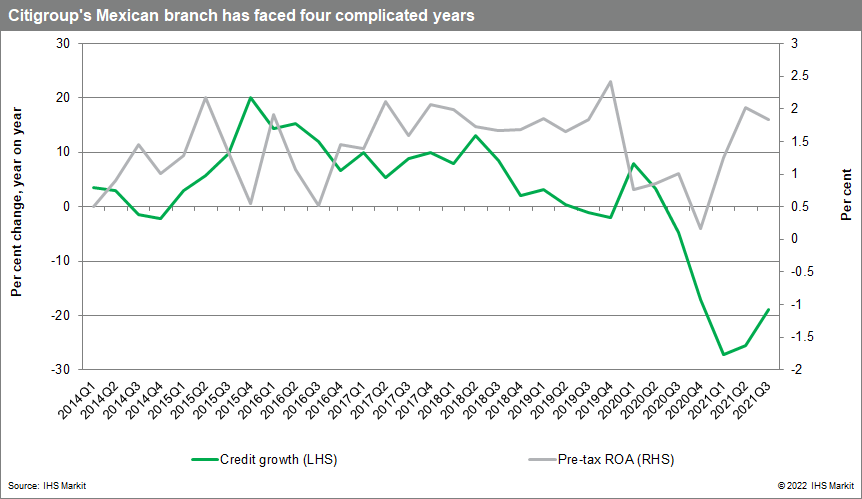 In October 2021, Lebanon contracted with a third-party auditor
to estimate the size of the BDL’s debt burden and potential losses.
Originally contracted for completion within 12 weeks, the audit by
Alvarez and Marsal could be completed in February, having
reportedly been delayed because of a lack of BDL responsiveness to
data requests. Quantifying the scale of BDL losses is a critical
first step in Lebanon restarting stalled talks with the
International Monetary Fund (IMF) seen as needed to restructure the
banking sector. IHS Markit experts previously noted that sovereign
debt holdings (10% of total assets) and deposits at the BDL (60% of
total assets) make up most of the banking sector’s assets. Based on
recent government payments, we estimate that a de facto reduction
of 50% on local currency-denominated debt and 92% on foreign
currency-denominated debt has already occurred – a likely
indication of what could be considered sustainable going
forward. 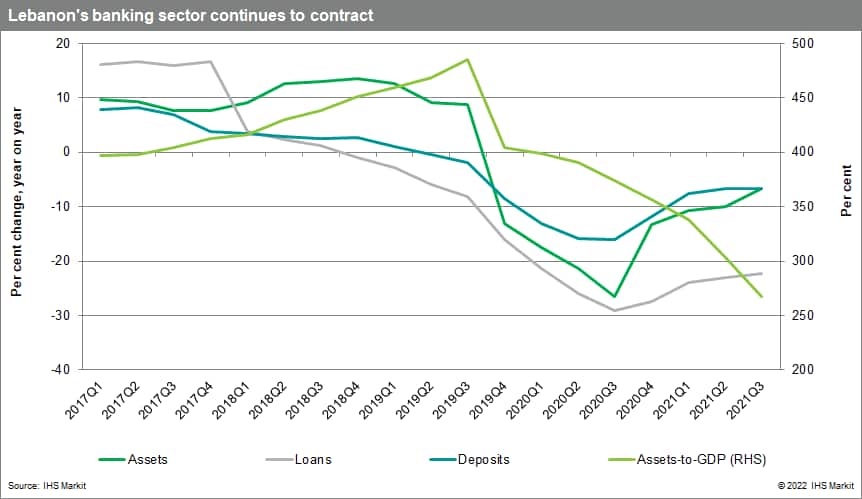 At the onset of the pandemic, most countries in Sub-Saharan
Africa adopted an accommodative monetary policy to support their
economies. However, because of significant inflation risks, IHS
Markit experts forecast risk to interest rates in some of
Sub-Saharan Africa’s largest economies, namely Angola, Ghana,
Kenya, Nigeria, and South Africa, to be towards the upside for
2022. We forecast an average NPL ratio of 11.7% for these five
countries for 2022 and significant interest rates hikes, at a time
when these countries are already battling with asset-quality
challenges (particularly Angola, Ghana, and Kenya) because of
legacy problem loans and ongoing stresses related to the pandemic.
In addition, further interest-rate hikes will push banks to lend
more to the sovereign, which in the case of Sub-Saharan Africa is
already at a notable level. 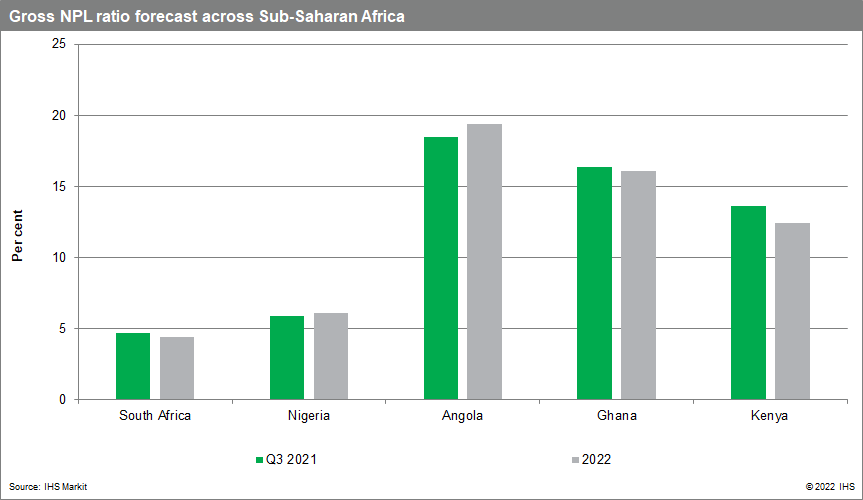