And now, despite having silenced nearly all forms of dissent, the party appears to worry that it still doesn’t command enough ideological and political loyalty — and is launching a vast effort to redouble education on both fronts.

“Ideological and political work is the party’s fine tradition, distinct characteristic and prominent political advantage — it’s the lifeline of all its work,” the guideline said. “(It) has a significant bearing on the future fate of the party, the long-term stability of the country, and the cohesion and unity of the nation.”

A central part of the campaign is focused on the promotion of “Xi Jinping Thought on Socialism with Chinese Characteristics for the New Era,” the political doctrine of Xi which was written into the party’s constitution in 2017. Before Xi, only Chairman Mao Zedong (“Mao Zedong Thought”) and paramount leader Deng Xiaoping (“Deng Xiaoping Theory”) had their eponymous political philosophies enshrined in the party’s theoretical pantheon.

Since 2017, Xi’s doctrine has been frequently studied by party cadres at meetings and on a specially designed propaganda mobile app designed to teach the philosophy.

And now, the party wants the wider public to enhance their “sense of political, ideological, theoretical and emotional identification” with Xi’s ideology, according to the directive.

Already, a campaign is gathering pace to get Xi’s doctrine further “into the textbooks, into the classrooms and into the brains of students,” according to the country’s Ministry of Education.
In a statement last week, the ministry said primary and high schools across the country would start using textbooks on “Xi Jinping Thought on Socialism with Chinese Characteristics for the New Era” in September. Last fall, dozens of universities — including top globally-ranked institutions like Peking University and Tsinghua University — launched introductory courses on it.

And last month, the party’s Central Committee approved seven new research centers on Xi’s ideology, adding to the 11 already established. These centers have been set up by top universities and think tanks, provincial governments, and central government ministries.

Wu Qiang, a political analyst in Beijing, said the campaign is part of Xi’s move to further consolidate power and drum up public support before the party’s 20th congress next year. At that meeting, Xi is widely expected to stay for a third term, after he abolished presidential term limits in 2018.

“There are a lot of speculations over whether Xi’s doctrine will be officially shortened to ‘Xi Jinping Thought’ at the 20th congress, and all the ideological and political work is setting the stage for that,” Wu said.

While the international media has long referred to Xi’s philosophy as simply “Xi Jinping Thought,” its official name has remained unchanged. Its official shortening would put Xi’s legacy on an equal rhetorical footing with Mao, who built a cult of personality around himself and ruled China until his death in 1976.

Ling Li, an expert on Chinese politics and law at the University of Vienna, said unlike in Mao’s China, Chinese people now face a deluge of digital information, despite the party’s best censorship efforts. “Therefore, if the party is determined to emerge from the information battle as the winner, it is vital for it to reconstruct the lens with which people read and interpret information so that people can always reach the ‘correct’ conclusion even when being exposed to uncensored information,” she said.

And to do that, the party is looking to tighten ideology in all aspects of society, from the government, companies, schools, rural villages and urban residential communities to the internet, according to the directive.

In residential communities, the party demands ideological and political work to “deeply permeate into the work and life of the masses.” In the countryside, the party wants to nurture “new era farmers with ideals and moral integrity” who are also “well educated and disciplined.”

Some villages, for instance, have doubled down on ideological education by broadcasting party propaganda from loudspeakers installed on the roofs of people’s homes. In Xibaipo village in Hebei province which neighbors Beijing, loudspeakers deliver Xi Jinping Thought, party theories and policies to villagers three times a day, according to an article published last week by a party-run social media account.

In Anhui province, these type of propaganda loudspeakers have been placed in 10,000 villages. “Listening to the loudspeakers and studying the spirits of the General Secretary’s [President Xi Jinping] important speeches…has become a new trend among farmers and other rural residents,” the article claimed.

Photo of the day 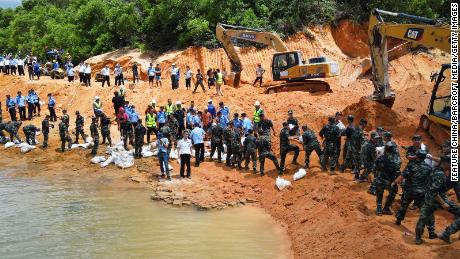 Race against time: Rescuers pump out water from a flooded tunnel under construction in the city of Zhuhai in southern China. Fourteen workers have been trapped in the highway tunnel after it collapsed in the early hours of Thursday.

The United States government is about to warn American companies about the risks of doing business in Hong Kong, but don’t expect Washington to tread much new ground just yet.

US President Joe Biden on Thursday confirmed a rumor that’s been floating around various media outlets all week: His administration plans to soon issue an advisory to companies cautioning them of a “deteriorating” situation in the Chinese territory.

“The situation in Hong Kong is deteriorating, and the Chinese government is not keeping its commitment that it made, how it would deal with Hong Kong,” Biden told reporters at the White House on Thursday, referencing Beijing’s pledge to maintain the city’s semi-autonomous status for 50 years from the date of its 1997 handover from Britain.

Biden described the announcement as “more of an advisory as to what may happen with Hong Kong,” without divulging more details.

The business advisory “probably won’t pack an immediate punch,” according to Brock Silvers, chief investment officer for Hong Kong-based Adamas Asset Management. He added that “few US companies currently operating in Hong Kong will be surprised at its content or otherwise unaware of Hong Kong’s growing risks.”

But Silvers said that it does reflect an “increasingly contentious” relationship between China and the United States. Relations have been eroding for some time as the two countries clash over everything from Hong Kong and Xinjiang to Big Data and foreign investment.

American companies have also been heeding caution in Hong Kong for a while, too.

Last month, the president of the American Chamber of Commerce in Hong Kong called the demise of the city’s pro-democracy tabloid Apple Daily a “shot across the bow” after its journalists were arrested and millions of dollars in assets were frozen. Authorities cited violations of a new national security law as their rationale for cracking down on the publication.
“It’s not just the closure of Apple Daily,” AmCham Hong Kong President Tara Joseph told CNN Business at the time. “It’s the new normal, and the change that Hong Kong is going through from its era as a post-British colony to an era where it is, more and more, part and parcel of China.”