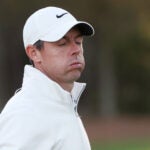 Rory McIlroy on Saturday at TPC Sawgrass. The look says it all.

Three days of storms at this Players Championship did more than influence scorecards.

Outside of Cameron Smith’s win, the biggest story at the PGA Tour’s showcase event was rain, wind and the golf that was played in it. At TPC Sawgrass, Thursday’s play was delayed twice, Friday saw only a few hours of action, and Saturday started late. The environment meant that scores — and eventually prize money — were determined by tee time.

“We got really lucky with the draw,” Anirban Lahiri said Sunday.

“I got the lucky side of the draw,” Paul Casey said.

“Super fortunate to be in the wave that I was in,” Will Zalatoris said.

How so? When the players in the morning wave of tee times eventually put golf balls in the air on Thursday afternoon, they experienced some of the best scoring conditions Sawgrass has ever seen — little wind and soft greens, not to mention the ability to use lift, clean and place on golf balls to account for the mud buildup. And, for the most part, these pros ducked Friday’s rain and Saturday’s 40 mph-plus winds.

But that was just half the field. The other 72 golfers did not avoid the bad stuff.

“I hope it blows like this in the morning and they freeze their butts off since they’ve been sitting at home all day watching us in the carnage,” Kevin Kisner said. He played in the Friday rain and the Saturday winds and was referring to the other half of the draw, who played some of their second round on Saturday but finished up on Sunday, when it was colder but less windy.

Which brings us to the scoreboard.

Which brings us to the payouts.

According to PGA Tour Shot Link payout data, players on the “lucky” side made over $7 million more than their counterparts: The original Thursday morning-ers won $13,765,676, helped by Smith’s winning payout of $3.6 million; the original Thursday afternoon-ers earned $6,483,921, with their high man being Kisner, who finished fourth and won $980,000.

Of course, “luck of the draw” is not new to golf; it happens frequently at the Open Championship, for example. And there’s the simple fact that players among the original Thursday morning crew were possibly just better — we’ll simply never know how they would have fared in the wind.

Still, with the PGA Tour’s largest-ever purse up for grabs, and some of the wildest weather you’ll ever see, when you played was perhaps just as essential as how.

Rory McIlroy was in the original Thursday afternoon draw and finished tied for 33rd. “You get your good ones, and you get your bad ones,” he said. “You have to believe that they all even out over the course of a year or a career, I guess. I’ve certainly been on the good side of a draw many times, and I’ve been on the bad side a lot, too. But at the end of the day, I feel like it all just sort of evens out.

“It sucks that the bad end of the draw is this tournament, but it is what it is.”

Nick Piastowski is a Senior Editor at Golf.com and Golf Magazine. In his role, he is responsible for editing, writing and developing stories across the golf space. And when he’s not writing about ways to hit the golf ball farther and straighter, the Milwaukee native is probably playing the game, hitting the ball left, right and short, and drinking a cold beer to wash away his score. You can reach out to him about any of these topics — his stories, his game or his beers — at nick.piastowski@golf.com.