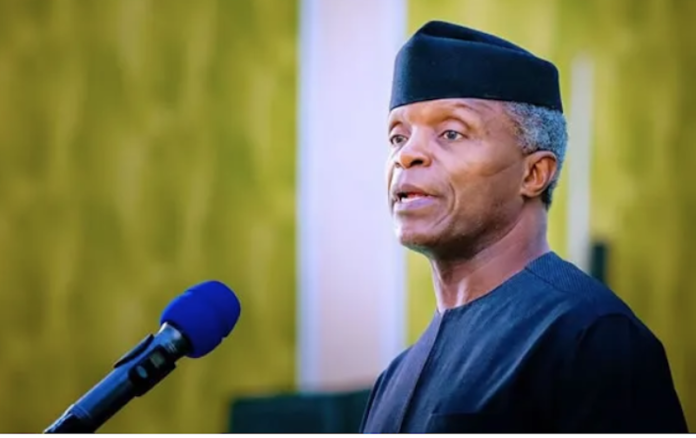 Vice President Yemi Osinbajo has described the Igbo apprenticeship model as a good way of building wealth among people.

Osinbajo spoke virtually from Abuja to participants of a national summit in Awka, convened to understudy the model, which is said to have produced several millionaires.

Speaking on the model which is popularly known as ‘Igba boi’ in Igbo language, Osinbajo harped on the need to encourage the scheme to ensure continuation.

“The scheme has the full potential to do for the Nigerian economy what similar apprenticeship schemes have done in many parts of the world especially in Germany and India.

“I commend the organisers of the event, and I’m hopeful that the summit will improve the growth and possibilities for the Igbo apprenticeship scheme.”

While speaking on the theme: ‘Repositioning The Igbo Apprenticeship Scheme For Sustainable Economic Development’, the Keynote speaker and Chairman, United Nigeria Airlines, Dr. Obiora Okonkwo recommended that the scheme should be institutionalised.

Okonkwo attributed his success in life to Igbo apprenticeship scheme which he said he engaged in during the early days of his life at Onitsha Main Market, Onitsha, Anambra State.

“I am sure some of you may have been wondering why I was chosen to deliver the keynote at this event. The simple answer is that the apprenticeship scheme and the Onitsha Main Market hold a very special place in my heart as that was where I had my first stint in business.

“My father died when I was 14 years old, forcing me to combine my secondary school education with managing the business and his apprentices. That meant I went to school in the morning and continued at the Main Market in the afternoon. That basic trading experience, in many respects, helped hone my business instincts and also instilled in me a deep sense of industry and hard work that have defined my life’s journey to date.”

Okonkwo said because of the experience, when the Nnamdi Azikiwe University Business School in July 2019 honoured him with the ‘Philanthropist of the Year Award’, it was only natural for him to try to give back by endowing a major research project on the future of Igbo entrepreneurship.

The National Summit on Igbo Apprenticeship Scheme was organised by Anambra Broadcasting Service (ABS) in collaboration with the Awka Chamber of Commerce, Industry, Mines and Agriculture, AWKACCIMA, in Awka.