The British Virgin Islands have weathered some devastating storms. When Hurricane Irma lashed the territory with 220mph winds in 2017, five people were killed and more than 80 per cent of the buildings damaged.

But now the idyllic eastern Caribbean archipelago faces turbulence of a different kind with unpredictable consequences for its role in global finance. The most immediate challenge is a British government inquiry into allegations of corruption and collusion between leading politicians on the island and organised crime, which is due to report by mid-April.

Also looming over the islands is the economic crime bill being rushed through Parliament because of the Ukraine war. It will oblige offshore companies holding UK property to disclose their beneficial owners.

And next year brings a deadline from London for the BVI to launch a publicly accessible register showing the ultimate owners of the hundreds of thousands of international companies registered locally, which one expert sees as nothing less than “a stake through the heart” of the business model” of offshore finance. 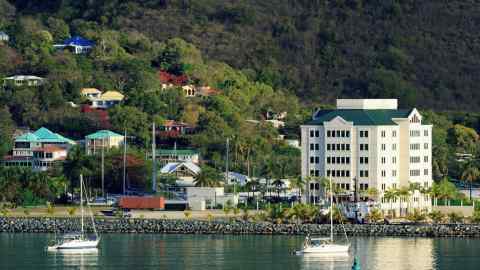 These threats to the BVI and the global offshore industry come amid a hardening of attitudes globally towards offshore finance following a spate of highly publicised leaks of confidential files.

The documents showed how some of the world’s politicians and wealthy business people used the secrecy offered by offshore jurisdictions such as the BVI to hide ill-gotten gains or dodge taxes.

Islanders are confident they will weather the latest storms but international experts are less certain — some question whether the offshore finance industry is sustainable in its current form.

Tax haven critics would not be sorry to see it shrink or disappear. Many see the BVI and other offshore centres, such as the Channel Islands and the Cayman Islands, as a web designed to conceal wrongdoing, especially tax evasion. But the tax havens themselves and their clients insist that it is perfectly legitimate to minimise tax by legal means, to protect assets from political turbulence in unstable countries and seek anonymity to protect privacy reducing the risk of unwanted attention, whether from terrorists, kidnappers or stalkers.

The tax advantages have diminished in the last two decades, but the appeal of concealing ownership has only increased for many rich families in the internet age.

So what questions do the latest threats to the BVI and tax havens generally pose for wealthy UK-based investors, both for those who are domiciled for tax purposes and those who are non-domiciled, usually because they are foreign citizens or have other strong links with other countries?

The casual visitor to the British Virgin Islands might be forgiven for missing the giant offshore finance industry altogether. From the air, the most striking features of the islands are the steep verdant hills falling away to white sandy beaches lapped by turquoise seas. Entering the tiny capital Road Town, the yachting marina and the cruise ship terminal loom large. Offices are housed in modest low-rises, many hosting shops at street level.

Yet the 373,000 companies registered in the BVI own an important slice of global wealth. A 2017 study by Capital Economics estimated that $1.5tn in assets was controlled by BVI entities; there is no official figure. The IMF cites estimates which put total personal wealth in tax havens at $8.7tn to $36tn. The range just shows how little is known.

The easy process of setting up a BVI company, along with guaranteed privacy, has long made it popular with wealthy individuals and large corporations looking to shelter assets.

“We take pride in that we have, over the past 40 years . . . developed a world class network of international financial services providers, combined with advanced digital systems and regulatory practices under a common law framework,” BVI premier Andrew Fahie told the Financial Times in an interview. “We also recognise about the security, about the confidentiality, it’s very important.”

The clients and their lawyers agree. Simon Goldring, an international tax expert at law firm McDermott Will and Emery, says that holding UK property via BVI structures no longer offers tax advantages, even for non-domiciled individuals, following government moves over the past decade to bring offshore-owned property into the capital gains and inheritance tax nets. “The main benefit now is anonymity,” he says. “Wealthy clients own UK property through offshore companies mainly for anonymity as they are high-profile.”

That anonymity is likely to be threatened by the economic crime bill, once it completes its passage through the House of Lords. The Commons has approved the measure.

Also, owning UK assets via BVI companies will not help Russian oligarchs dodge sanctions over the Ukraine war; the islands have pledged to help the UK government enforce any punitive measures.

Goldring says BVI companies remain a popular choice for wealthy individuals to hold non-property assets such as trading companies, shares or bonds. A common structure might involve an investment portfolio owned by a BVI company, which is in turn owned by an offshore trust located either in the BVI or another jurisdiction such as the Channel Islands.

Under such an arrangement, UK inheritance tax and capital gains tax can be mitigated for non-domiciled individuals in the UK — even after 15 years when they become “deemed domiciled” in the UK, meaning that they are regarded in law as domiciled.

Moreover, as tax havens have come under greater international scrutiny following the leaks of confidential papers, lawyers have noted that hubs with better legal reputations have become more popular at the expense of others — a shift that has benefited the BVI, along with the Cayman Islands and the Channel Islands.

“Following the Panama Papers and the Paradise Papers there has definitely been a flight to quality,” says Laura Perkins, an offshore lawyer at Jersey-based Collas Crill. “High net worth individuals are really concerned about reputational risk, and the reputational risk associated with certain jurisdictions is higher than others.”

Perkins says the BVI is appealing for wealthy clients because they could get “respectable law firms, easy access to good quality advice . . . a highly respected court system with an ultimate right of appeal to the Privy Council . . . and it’s politically very stable”.

One of the last remnants of the British empire, the BVI is governed under a quirky arrangement with power shared between a governor sent by the Foreign Office and a locally-elected premier.

Despite the territory’s name, evidence of British rule is scant. The architecture of Road Town and the main island Tortola is more American than anything else, like the burgers on the menus and the clothing in the shops. The currency is the US dollar and symbols of British power are conspicuous by their absence.

So governor Augustus Jaspert’s decision last year, just before leaving the role, to exercise colonial-era powers to appoint a commission of inquiry from London to investigate allegations of high-level corruption tore through this delicate constitutional tissue with hurricane force.

While some islanders welcomed the scrutiny offered by the inquiry as long overdue, others mentioned resentment caused by…