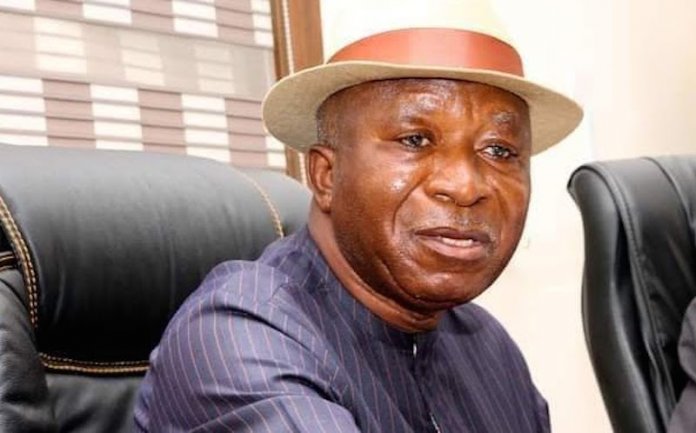 The story of Shoot-at-Sight, one of the leading Niger Delta freedom fighters, whose real name is High Chief Bibopere Ajube, is one that could make the best sellers list, when published as a book. He was one of the prominent leaders of the Niger Delta who willingly dropped his arms and abandoned violent agitation to embrace amnesty following its proclamation by the late former President Umaru Musa Yar’Adua, in his quest to restore peace in the once volatile Niger Delta region.

Ajube, who hails from the Ijaw riverine Arogbo-Ibe in Ese-Odo Local Government Area, Ondo State, had no formal education. He could not attend primary school. But right from childhood, he saw the river criss-crossing his community as an opportunity for fishing. So, he grew up with a survival instinct as a fisherman.

From his Ondo fishing camp, Ajube embarked on a voyage to Delta State where he met another leading light in the struggle, a former ex-agitator, High Chief Government Ekpemupolo alias Tompolo. The meeting no doubt commenced the era of violent agitation that humbled the country’s economy. When asked to described himself, Ajube, who is always economical with words said: “I am a man of humble beginning. I had no formal education.

I was brought up in a creek community called Arogbo-Ibe where fishing was predominant and so I naturally grew up to be a fisherman before teaming up with Tompolo to fight for the emancipation of the Niger Delta”.
His acceptance of amnesty marked the beginning of his journey to self discovery in business. It made him to wear his thinking cap as he saw himself metamorphose into a major player in the economy of the Niger Delta. This is to the extent that he now commands the economy, wages war against poverty, fights unemployment and creates opportunities for jobless youths in the Niger Delta region.

It is no surprise that his name is fondly mentioned by the Interim Administrator of the Presidential Amnesty Programme (PAP), Col. Milland Dixon Dikio (rtd), at every occasion. To Dikio, Ajube is an outstanding example of what is possible in the Niger Delta. The amnesty boss believes that if Ajube despite his limited educational background could rise above the challenges in the Niger Delta to become one of the most successful entrepreneurs among his peers, other ex-agitators have the potential to do same.

According to Dikio, the story of Ajube is a clear example of what is possible in the Niger Delta.
“Ajube today is a model of success and an inspiration to so many of our youths in the region. We are using his story to inspire and encourage others to change their mindset of depending on N65,000 monthly stipend. We are encouraging them to key into our new vision of transforming the ex-agitators into entrepreneurs and/or employable citizens who will become net contributors to the economy of the region and the nation like Ajube.”

Therefore, Dikio has since embarked on the mission to make other ex-agitators think out of the box like Ajube by capitalising on the numerous opportunities in the region to become successfull entrepreneurs instead of depending solely on N65,000 monthly stipends.

Ajube’s mindset is different. Instead of settling for N65,000 monthly stipend like others, he rather decided to seek and develop other economic opportunities in the Niger Delta made possible by the amnesty programme. He chose to be an entrepreneur and floated a company called Bradama International where he has succeeded in training a number youths from the region, mentored and employed them into his company.

His company, Bradama, which means “handwork”has become one of the leading oil and gas companies in Nigeria.
In fact, Bradama International offers a wide range of services such as pipe fabrication and pipeline construction; training on professional welding; dredging, canalisation and marine services among others.

In fact, Ajube, who did not see the four walls of a primary school, hires and pays graduates with various higher degrees fat salaries every month. The company, which designs and construct sophisticated pipelines, has completed and delivered multi-billion-naira projects for big players in the petroleum and power sectors.

In his several meetings and engagements with youths in the region, Col. Dikio has repeatedly said that he wants all ex-agitators to be like Ajube. Dikio was particularly impressed that Ajube was already implementing a new model he introduced in the amnesty programme to change the existing training approach he inherited from his predecessor. He was elated when he discovered that his model of Train, Mentor and Employ (TME), was being practised in Bradama and has transformed some of the former footsoldiers of Ajube into entrepreneurs.

Using Ajube as an example, Dikio has been touring the Niger Delta preaching the gospel of entrepreneurship to all ex-agitators. He has been preparing the ex-agitators to capitalise on the opportunities and comparative ecomomic advantage in the region to create wealth and escape the shackles of N65,000 monthly stipend mentality.

In his last tour of the region, Dikio, who had the picture of Ajube in mind, started work on his project of constituting the ex-agitators into cooperatives in three broad areas of maritime security, food security and maritime transport. He held a workshop that taught the ex-agitators how they could successfully transform themselves into wealthy entrepreneurs leveraging on the cooperative model.

For Dikio, if ex-agitators fail to think like Ajube by taking advantage of the economic opportunities in their region to create jobs and grow wealth, they will shackled to the negative thinking that N65,000 is all that is available for them. Therefore, Dikio did not hesitate to describe the monthly stipend as a stronghold which the ex-agitators must break away from to maximize their potentials the way Ajube did.

He said to them: “You must think of how you can graduate from stipends after 11 years. I am offering you a platform. You have to form yourselves into cooperatives. You are better than this stronghold of N65,000. We can’t make progress sitting in one place. My job is to make you think beyond the N65,000 mentality.
“We are starting a process of making our ex-agitators self-relient, entrepreneurs and by extension employers of labour. We want to open their minds to see the numerous resources that are available in their environment and how adding value will make them become financially self relient.

“When you form partnership, you become stronger. There is a spirit behind coming together. Stop making excuses to remain where you are. We want to see you rub your minds together. Develop business ideas. If you start in six months you will be shocked. Your lives will change.

“If what you get is more than what you spend, don’t bother. You must learn the language of money to be rich. The rich invest while the poor don’t. No matter how much you get, you must take something out. You must know basic things. If you choose to be rich, you will be rich. Change perception about you. Define yourselves through your actions”
Responding to a question about what drives his passion and inspiration to strive for success, Ajube said he derived his inspiration from his humble background and this has spurred his passion to lift his community out of poverty.

He said: “I am from a very humble background and I know how difficult it is to survive without education. That’s why a number of our youths are engaged in criminal activities because they have no jobs and they must survive. So with no job, no education, no form of acquired skill through vocational training, the future looks bleak for the youths. That’s why I decided to make a difference. I believe the sure way to put a stop to the criminal activities of youths in my community is to have them productively engaged and be able to provide them with education, enable them acquire skills and access to social amenities.
“These are the things I thought about and it inspired me to do it for my community. Ultimately, I look forward to having more graduates in our community”.