Prominent meme token Shiba Inu (CRYPTO:SHIB) has been on a volatile ride of late, to say the least. Today, the dog-inspired token was up 3.4% at 9 a.m. ET.

This move came amid what appears to be a more stable crypto market Monday morning. Most major cryptocurrencies are higher today, and some have even moved into positive territory for the week.

However, the key driver taking Shiba Inu higher today appears to be speculation around this meme token playing a role in the metaverse. Shiba Inu ambassador Shytoshi Kusama posted on Medium this weekend about a potential Shiba Inu metaverse game. Today, it seems investors are factoring in a more bullish outlook on Shiba Inu on this news. 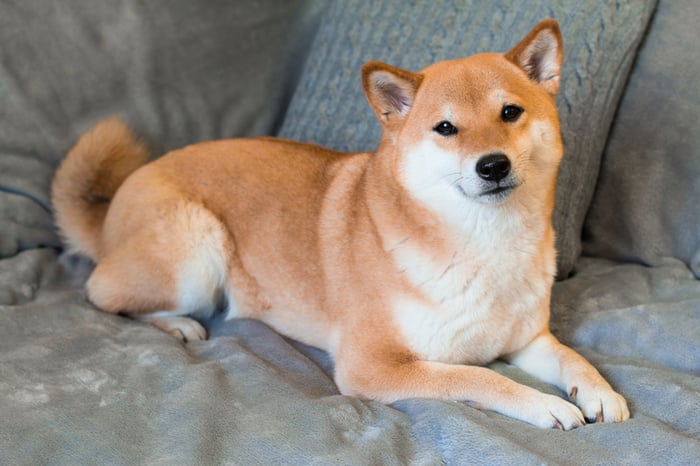 This post suggests that the Shiba Inu development team is looking at a big-time partnership to develop an online game. Notably, famed video game designer William David Volk has been tapped as a partner on this project.

Volk has quite the track record when it comes to the gaming space. His 36 years of experience include an executive role at Activision Blizzard, as well as a number of high-profile projects that have investors excited about the potential of this collaboration.

This post also suggests the blockchain version of the game that’s being theorized right now will eventually use Shiba Inu’s decentralized network, incorporating Shiba Inu into the metaverse. All the excitement around the metaverse right now could provide for some serious speculative momentum in the near term.

Today’s rise of 3.4% at 9 a.m. ET is a meaningful improvement for this dog-inspired token over the price action of most days this past month. In fact, over the last month, Shiba Inu is down approximately 45%.

One of the biggest gripes investors have with Shiba Inu is its relative lack of utility. Besides being a meme token with a tremendous amount of hype and a strong and growing community, there’s not much under the hood. A number of reports highlight the fact that Shiba Inu has the fewest active repositories of any major project.

Sure, this token has a decentralized exchange, will be accepted for payments by large corporations such as AMC Entertainment Holdings, and has recently surpassed 1 million wallet holders. That’s great.

However, this potential move to the metaverse and the blockchain gaming space is perhaps the most tangible catalyst Shiba Inu has had in some time. Investors looking for a reason to invest in Shiba Inu may have what they’re looking for.

Of course, this token remains highly speculative, and carries a tremendous amount of risk. Meme tokens are perhaps among the most difficult digital assets to intrinsically value. Accordingly, investors looking at the bullish drivers of Shiba Inu should also take into consideration the downside risks with this token.

This article represents the opinion of the writer, who may disagree with the “official” recommendation position of a Motley Fool premium advisory service. We’re motley! Questioning an investing thesis — even one of our own — helps us all think critically about investing and make decisions that help us become smarter, happier, and richer.