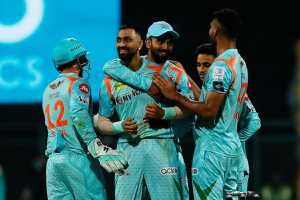 What’s going right and wrong for KL Rahul and Co ?

With an aqua marine blue jersey that might remind you of Sachin Tendulkar and the desert storm days, Lucknow Super Giants probably have the most eye-catching among all the blues in IPL 2022. But what about their performance? Has it been as eye-catching? To an extent. With one win and one loss in the competition so far, LSG have a long way to go in their maiden IPL campaign. And there have been some positives as well as some shortcomings.

It was the middle order that did a good job for Lucknow Super Giants in their maiden IPL outing, albeit in a losing cause against Gujarat Titans, while the top order delivered in a chase of 211 against Chennai Super Kings. That the bowlers made a game out of it despite the Super Giants posting only 158 against the Titans, was only possible because of half-centuries from Deepak Hooda and Ayush Badoni after their side had slipped to 29/4 batting first. In the big chase against CSK, KL Rahul set the platform for the side with a 26-ball 40, having been dismissed in the first game for a first-ball duck by Mohammed Shami while Quinton de Kock played a supporting role with a 45-ball 61. But Evin Lewis and Badoni have been the most impressive among the LSG batters in the competition so far.

The DDCA might not have paid much heed to Atul Wassan’s suggestion to consider Badoni, which followed an advice from now India coach Rahul Dravid to “look after these (Under-19) boys. But Badoni, now 22, is quickly making up for all the lost time. Rahul has nicknamed Badoni as Baby AB, and while he still has a long way to go to draw comparisons with the South African superstar, the Sonnet Club-bred cricketer has shown a 360-degree repertoire with his shot-making. Be it lofting or pulling a quick bowler like Lockie Ferguson or taking on the wily Rashid Khan, Badoni was at equal ease, likewise with his balance between cautious and aggressive batting. That he was at the finishing stages against both GT and CSK, and approached it without displaying any nerves, and that Rahul has been speaking about him quite regularly, shows how valuable an asset he is for the team.

While the likes of Marcus Stoinis, Jason Holder and Kyle Mayers will join the team soon, Lewis’s knock against CSK has ensured their entry into the eleven wouldn’t be that easy. Although dew made batting that much easier in the second innings, CSK had a strategy in place and were trying to stretch the game out of LSG’s reach. They also lost quick wickets and were relying on Lewis, who wasn’t batting in his usual position as an opener. He batted at No. 3 against GT while he came out at No. 4 in this game. He shouldered the responsibility well, hitting a match-winning 55 off 23, which will give the management a happy headache going forward in the tournament.

While most of LSG’s batters have been amongst the runs, the lean patch of Manish Pandey will be a worry for the team think tank. He has fallen for two single-digit scores in his first two outings for LSG, and has scored less than 20 in five of his last 10 IPL innings. Although 303 runs at an average of 37.88 in his last 10 outings is not a small number, his strike rate of 122.67 – when teams are looking to really push on considering the dew factor – will be another cause for concern.

In the absence of Mark Wood, Dushmantha Chameera was marked as the next best choice to partner Avesh Khan, both at the start and the death. The Sri Lankan pacer, however, has blown hot and cold in the two matches so far. His figures of 2 for 22 off three overs gave LSG a fighting chance to defend against GT. His pacy yorker to Vijay Shankar to rattle the stumps was a top-notch delivery and also a good setup. Chameera also bagged the award for the fastest delivery in the game against CSK, but that was his only consolation. His four overs went for 49 runs without a wicket while he also misfielded plenty of times and dropped a catch.

Chameera’s pace might be an influencing factor for his selection in the eleven but he might be on a short leash unless his fielding standards go up while there’s also the impending arrival of the other overseas players. LSG also included Andrew Tye in the game against CSK and while he did pick up a couple of wickets, he conceded 40 from his four. With Holder set to be available for the next game, LSG are likely to choose between Chameera and Tye.

Avesh Khan, LSG’s costliest buy in the auction at INR. 10 Crore, is yet to make a big impact. While he has picked up three wickets and has bowled with a lot of pace, The 25-year-old has also leaked runs and has been found lacking in terms of consistency in lines and lengths. Avesh, though, is still the lead pacer in the line-up and LSG will be hoping he steps up to his responsibility very soon.

Krunal Pandya started the tournament well with the ball, finishing with 1-17 against GT while Ravi Bishnoi and Hooda were taken for runs (which also had a lot to do with Rahul’s captaincy decisions). Bishnoi, meanwhile, was LSG’s best bowler against CSK, with figures of 2-24, while Krunal ended up going at 12 an over for his three wicket-less overs.

Two matches is a small sample size to see where LSG are going in terms of their performances. But the victory against defending champions will give them a lot of confidence going forward. Andy Flower, Vijay Dahiya, Andy Bichel, and Richard Halsall are all experienced coaches while mentor Gautam Gambhir knows what it takes to win an IPL title. Rahul himself has led the Punjab Kings earlier, although he did not get the results he would have expected. As far as LSG is concerned, the combination they have picked from the available options and the roles given to them, appear pretty well defined, although there was that instance of Rahul bowling one over too many from Hooda against GT and keeping Bishnoi’s last over quite late. But these were only negligible errors and LSG will be confident that they are on the right track.