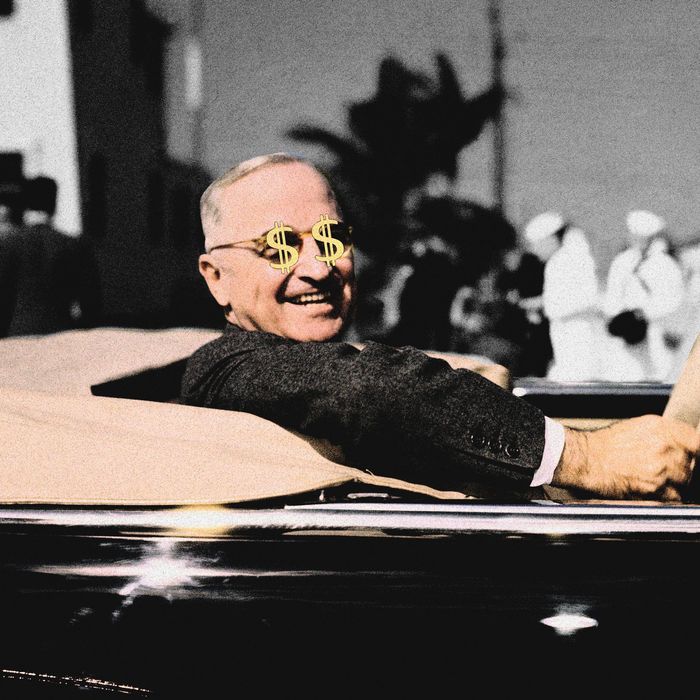 In February 1958, the immense prime-time audience that tuned into Edward R. Murrow’s CBS program See It Now was treated to a historical first: a television interview with a former president of the United States. Among various other topics, the great journalist asked Harry Truman about how he was getting along financially.

As was his custom, the plainspoken Missourian minced no words about his situation. “You know,” Truman told Murrow, “the United States government turns its chief executives out to grass. They’re just allowed to starve.” Truman went on to claim that only his recent inheritance of the family farm was keeping him off the welfare rolls: “If I hadn’t inherited some property that finally paid things through, I’d be on relief right now.”

The tale of financial woe Truman was telling the television public was the same one he had been repeating privately to leaders of Congress, as he pushed for a bill to provide him with a pension. “Sam, I’m not lobbying for the bill,” Truman had written to Speaker of the House Sam Rayburn a few months earlier. But if the bill did not become law, he added ominously, he would have to “go ahead with some contracts to keep ahead of the hounds.”

The spectacle of a former president of the United States being forced to enter into grubby commercial arrangements to stave off penury was a favorite theme for Truman. So too was his claim that only the recent sale of the family farm was keeping him afloat. Just three weeks before the Murrow interview, he had written to House Majority Leader John McCormack, claiming that the overhead he had incurred in writing his memoirs and answering the blizzard of mail he received as a former president had amounted to more than $153,000 — a staggering sum when adjusted for today’s monetary values (this would be equivalent to approximately $1.5 million in 2021 dollars). “Had it not been for the fact that I was able to sell some property that my brother, sister, and I inherited from our mother, I would practically be on relief,” he told McCormack.

Truman went on to complain that the combination of enormous overhead and sky-high income taxes had left him with a net profit of only 6 percent on the original $600,000 sale price of his memoirs. He noted that, when he was president, he had intervened with the IRS to get the agency to give favorable tax treatment to Dwight Eisenhower’s memoir deal, but that after succeeding to the same office, Eisenhower had failed to return the favor.

“I don’t want any pension and never wanted any because I’ll manage to get along,” Truman wrote, “but I am just giving you the difference in the approach between the great General and myself on the Memoirs. My net return will be about $37,000 over a five-year period!”

Six months after the broadcast of the Murrow interview, Congress passed and Eisenhower signed the Former Presidents Act, the law that now provides our current ex-presidents with millions of dollars per year in benefits.

What neither the general public nor the politicians that Truman successfully pressured knew at the time was that this lobbying effort was based on falsehoods. Harry Truman was a very rich man on the day he left the White House, and he became a good deal richer in the five and a half years between that day and the passage of the FPA. Moreover, Truman departed from the White House with so much money because he apparently misappropriated what in today’s terms would be millions of dollars from the United States government.

The relatively recent release of some of Truman’s financial records has made it possible to nail down the precise details of this story. Yet the fact that it has taken more than 60 years for that story to come to light also tells us a great deal about what could be called the politics of nostalgia: of the tendency of everyone from professional historians to the public at large to cast a sentimental haze around certain historical figures and periods, when we assume honorable men ruled the land and America was still truly great.

This tendency has produced a historical myth about Harry Truman that still has contemporary consequences, as it continues to be deployed to rationalize the unjustifiable practice of showering millions of dollars per year of government benefits on our uniformly wealthy ex-presidents.

This past February, when the Senate failed for a second time to convict an impeached Donald Trump, the purported billionaire remained fully eligible to receive a seven-figure annual package of taxpayer support.

This includes an annual pension, extremely expensive office space — currently the federal government spends nearly $130,000 every month renting offices for former presidents Clinton, Bush, and Obama — salaries for staff, and other emoluments. Altogether, it adds up to more than $1 million per year in benefits for each of these former presidents. (Jimmy Carter receives about half this much, mostly because he rents far less-expensive real estate than his successors.) These figures do not include the cost of lifetime Secret Service protection. That cost is classified and authorized under a different statute than the Former Presidents Act. (In May, it was revealed that Trump’s Mar-a-Lago resort had been billing the Secret Service for the use of a room at the resort — a space the agency was employing for logistical purposes while protecting the former president.) 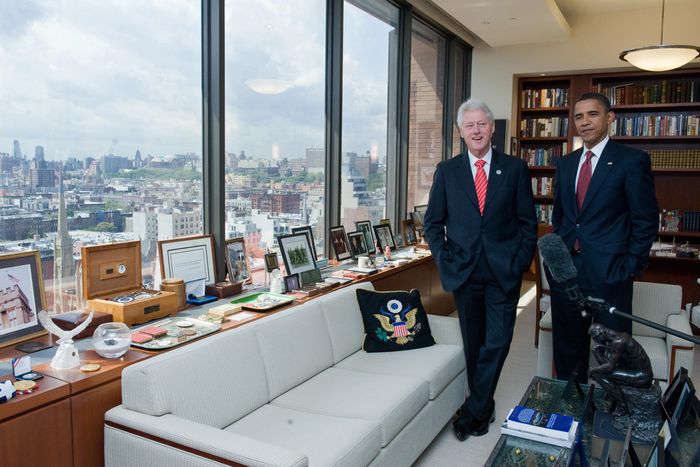 In recent years, as ex-presidents have accumulated tens of millions of dollars from book deals, speaking fees, and other avenues by which they can cash in on their fame, a series of bipartisan bills have attempted to pare the FPA’s benefits. In 2016, one such bill passed both houses of Congress, only to be vetoed by President Obama. Since then, two more bills have made their way through the legislative process without ultimately becoming law.

Supporters of these efforts, which date back to the 1980s, often argue that the FPA was passed in large part because Harry Truman left the White House with very little money and no source of income beyond his $112.56 per month Army pension. Truman refused to exploit his status as an ex-president to ameliorate his financial struggles, they say, and, as a result, Congress passed the FPA to make sure both he and other future former presidents would not, in the words of one of the bill’s sponsors, be forced “to write and lecture to gain a livelihood in their final days.” The aim of the bill was to ensure that former presidents do not engage “in business or occupation which would demean the office he has held or capitalize upon it in any improper way.”

Various critics have pointed out that, despite the FPA’s generous benefits, Truman’s dignified example has not been followed by his successors. For example, in 2017, the distinguished sociologist Jerome Karabel took to the pages of the New York Times to criticize Barack Obama for accepting a $400,000 speaking fee from a Wall Street firm, just a few months after leaving office. Obama, Karabel noted, was following in the unfortunate footsteps of his recent predecessors, going back to at least Gerald Ford, who accepted memberships on various corporate boards, and Ronald Reagan, who took $2 million for giving a couple of speeches to a Japanese company shortly after leaving office. He argued this modern-day pattern reached its “apex with Bill and Hillary Clinton, who earned a combined $139 million from such undertakings, including $35 million from speeches to financial services, real estate, and insurance companies.”