For most of the last year, expanded federal unemployment benefits helped keep Tammy Foster afloat while she was at home due to the coronavirus pandemic.

The 47-year-old, who lives in Joplin, Missouri, was forced to leave her job as a robotics machine operator for a dairy company after a doctor advised her that it was unsafe for her to work during the pandemic due to complicating medical conditions, like diabetes. While state and federal unemployment assistance did not equal what she had been making at her previous job, which paid $20 an hour, it helped cover rent, food, utilities during the months she was not working.

But when Missouri Gov. Mike Parson announced the state would stop providing additional federal unemployment benefits of $300 a week starting on June 12, Foster could no longer afford to stay home to stay safe. She and her husband both found lower-paying jobs at another food-manufacturing company in the area.

READ MORE: The pandemic forced millions out of a job. Some say they can’t return to the way things were

Foster had been working for four days when she started feeling ill. On July 6, she tested positive for COVID-19.

“The moment I was forced to go back to work, my life was put at risk,” said Foster, who had received the first dose of the Moderna vaccine before contracting the coronavirus.

Across the country, Americans who recently lost the extra $300 a week in unemployment benefits are weighing tough choices about returning to work. Although the financial lifeline is supposed to last through Sept. 6, Republican governors in 25 states made the decision to end the extra benefits early, arguing that the economy is recovering at a promising pace, vaccines are widely available, and many businesses are in need of workers.

“Montana is open for business again, but I hear from too many employers throughout our state who can’t find workers,” Gov. Greg Gianforte said on May 4. He was one of the first leaders to announce that his state would pull out of the program, arguing that “the vast expansion of federal unemployment benefits” was “doing more harm than good.”

As of July 16, federal unemployment benefits have been cut off in 23 Republican-led states, but remain in place in Indiana and Maryland due to legal battles. Louisiana Gov. John Bel Edwards also made the decision to stop federal jobless benefits at the end of July, becoming the first Democratic leader to opt out of the program early. At the same time, some of these states, including Missouri, now are experiencing a surge in coronavirus cases, making it riskier for workers like Foster to go back to the workplace.

In a recent PBS NewsHour/NPR/Marist survey, a majority of Americans said they believed state and federal unemployment benefits should end, but there was a divide along party lines, with 65 percent of Democrats responding they should continue and 81 percent of Republicans saying they should end.

It’s too early to say whether pulling these benefits has had the intended effect of helping employers address staffing shortages, but nine workers who recently lost the extra $300 a week described a challenging re-entry into the workforce during conversations with the PBS NewsHour.

“I just wish that government would be more considerate,” said Shaqeeta Cobb, who had stopped delivering for Instacart and DoorDash during the pandemic, but recently started taking orders again after Georgia pulled federal unemployment benefits. “What was done was done without thinking.”

How rushing back to work can curtail better opportunity

The U.S. unemployment rate was the lowest it had been in 50 years prior to the coronavirus pandemic — a number that belied the difficult economic reality for many low and middle-income Americans. In 2019, the median U.S. wage was $19.33 an hour, amounting to about $40,000 a year for a full-time, full-year worker. The wealth gap between America’s richest and poorer families more than doubled from 1989 to 2016, and as of 2018 the wage gap between Black and white Americans was not substantially different from what it had been in 1970, with the median Black household earning 61 percent of what white households earned. These inequities only worsened during the coronavirus pandemic, when Americans in low-wage jobs lost work at a higher rate, and Black, Latino and Asian workers continue to experience higher levels of joblessness than white workers.

At a moment when U.S. companies are reporting more than 9 million job openings that remain unfilled – a record high – labor advocates have said it’s a good time for Americans to ask for higher pay, more flexible work schedules and better benefits than their previous jobs offered. Some companies are offering hiring bonuses to lure workers in, and wages in sectors like leisure and hospitality are on the rise.

“Businesses are putting their money where their mouths are, and in some sectors by a lot,” said Michael Strain, director of economic policy studies at the American Enterprise Institute, a public policy think tank.

Nick Bunker, the economic research director for North America at the career website Indeed, noted there was one unemployed American for every job opening in May, which is higher than expected given there are still 6.8 million fewer available jobs than there were prior to the pandemic, according to the Bureau of Labor Statistics. “I think that number shows the surprising level of bargaining power that workers have right now because of the urgency on the employer side versus some hesitancy or patience on the job-seeker side,” said Bunker. 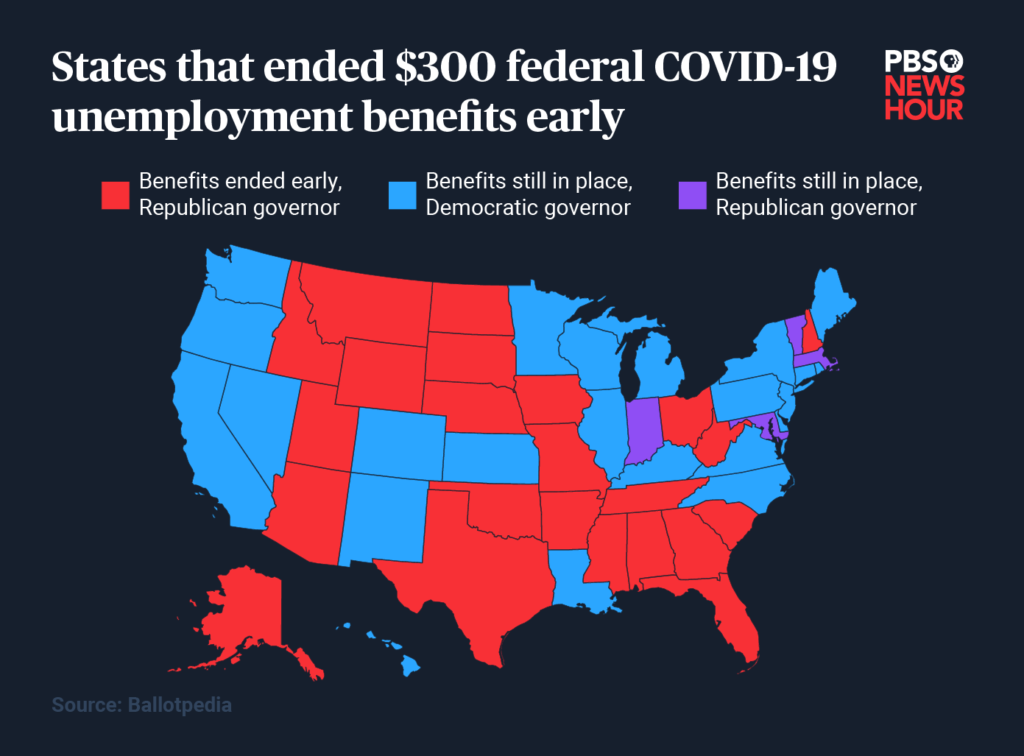 As of July 16, 23 Republican-led states have cut off federal unemployment assistance. Efforts to end the program were halted in Indiana and Maryland due to legal challenges. Louisiana will be the first Democratic-led state to cut off benefits early at the end of the month.

But some unemployed Americans in Republican-governed states, including Georgia, Ohio, and Utah, told the PBS NewsHour that the early ending of expanded unemployment benefits made it more difficult to secure a better job offer than what they had before the pandemic.

Cobb, a 25-year-old based in Conyers, Georgia, had stopped delivering for Instacart and DoorDash during the pandemic for fear of passing the coronavirus to her grandmother, with whom she lives. Prior to losing federal unemployment benefits, Cobb had been applying for jobs in customer service and warehouses with hope they would pay better than gig work — DoorDash deliveries can pay as low as $2 each — but wasn’t able to land anything.

Cobb said it hasn’t been as easy to secure employment as business owners’ calls for applicants would suggest. “You still have to go through an interview, and it’s not like you’re going to be hired on the spot just because they’re saying they need workers,” she said.

Since going back to gig work, Cobb said demand has not been steady, and she’s constantly measuring the cost of gas mileage against her pay to figure out whether it’s worth it. “No one is going to do an order for 10 miles, and you only get paid like $4,” she said. “It just doesn’t make sense.”

Cobb said that $300 per week had helped cover costs like car insurance, food and medical debt, and without the support of her family she would now be in a bad situation. “I felt like it was done as a political act,” she said of Georgia Gov. Brian Kemp’s decision to end federal benefits early. “They’re not giving us a chance to get back on our feet.”

Kelly Martin Broderick, 40, of Baltimore, has been working on a new career path since losing her job as the box-office manager of Baltimore Center Stage theater last June. “I really had to re-evaluate a lot of things, because the entire live entertainment industry just disappeared,” Broderick said. While on unemployment she was able to finish her bachelor’s degree on a scholarship and apply for a state training program to earn a certification in project management.

“They’re not giving us a chance to get back on our feet.”

“I want to find a position that is actually going to be a good fit for me, and support me in a way where I am not having to find another job on top of it,” Broderick said.

But when Gov. Larry Hogan moved to end federal unemployment benefits in Maryland — an effort that was ultimately blocked by a judge on Tuesday — Broderick began…